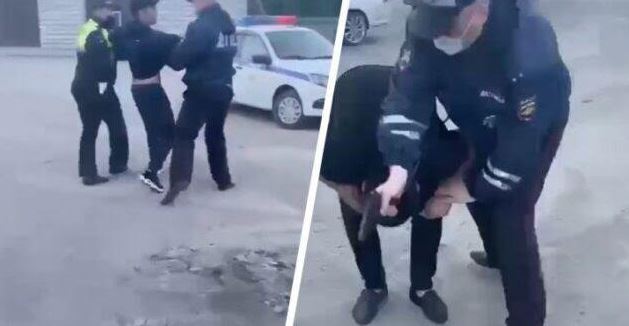 In recent days, it has been reported that an Azerbaijani man named Vakil Abdullayev was shot in the head by Alexander Gusev, a Russian police officer.

For the Azerbaijani people, the death of Abdullayev has an uncanny resemblance to the death of George Floyd, an African American who was brutally killed in police custody. In both cases, one must examine the role of xenophobia and racism in utilizing such disproportionate force to handle such small crimes.
Xenophobia has been on the rise in Russia since 2017, a recent survey conducted by the Levada Center shows.

Seventy one percent of the respondents have said they supported the ultra-nationalistic slogan “Russia for Russians”, with Romas, Chinese, Vietnamese, people from Central Asian and North Caucasian origin, Jews and even Ukrainians seen as the least desirable ethnic minorities.

In 2017, the xenophobic sentiments were admitted by 54 percent of the respondents.
However, in the United States, at least the murderers of George Floyd were brought to justice. In the case of Abdullayev, the murderer was released from police custody and Maria Butina, a candidate for the Russian Duma, offered the murderer a “reward for his service.” Indeed, such behavior by the Russian authorities should not come as a surprise.

According to the Russian Jewish Congress, a significant part of the Russian population still supports mottos such as “Russians for the Russians” and “Stop feeding the Caucuses,” and this should be understood as a manifestation of xenophobia and racial intolerance. Azerbaijani activist Abdulfaz Bahaduri believes that xenophobia and racial intolerance already influences Russia’s policy towards Azerbaijan: “The Russians actually created the situation to make it hard without them having their military on the border. This is going to persist. It is an excuse for Russians to extend their military presence in both Armenia and Azerbaijan.”

Of course, Russia is not the only nation that has demonstrated racial intolerance towards Azerbaijanis. It should be noted that anti-Azerbaijani sentiment also exists in the United States, France and other Western countries. As Azerbaijani activist Gunel Safarova noted, “French media is dominated by the Armenian Diaspora. Till today, they have a biased attitude towards Azerbaijan. Despite international law, the French authorities still make accusations against Azerbaijan.”

Professor Ali Asgarli concurred: “France is not neutral or objective. France is a strategic partner of Armenia and supported Armenia during the war. That is tragic and unfortunate. They have been part of the MINSK Group since its inception. This is bad for Russia was also never neutral or objective, for they got their military bases in Armenia. That is why it is wrong to expect them to resolve this problem.”

However, this racist sentiment does not merely affect Russia’s and France’s foreign policy, but also the lives of members of the Azerbaijani Diaspora, who are living in these countries. As a petition written by a group of Azerbaijanis stated, “We regard Butina’s statement as instilling xenophobia and intolerance in a country that we consider friendly, respectful and whose traditions, language and culture we honor.”

Can Kakism wrote an article titled “Racism in Russia and its affect upon the Caucuses people,” where he argued: “Nowadays, Russia is one of those countries which crucially suffer from the racist sentiments and movements. In this country, the radical right has an extensive social base and both the ruling party and some other political entities can put forward examples of extreme nationalism. Caucasian-origin people have been the most negatively influenced group from these approaches since the beginning.”

According to this report, “The Caucasian immigrants as well as the Northern Caucasians already holding Russian citizenship have been target of numerous violent attacks especially in the 2000s. At the same time, rising racism in Russia strengthens expectations from the government to follow more active imperialist policies as racist groups more intensely defend and voice the rights of the Russians living in the former Soviet republics. Furthermore, these groups provide an additional fighting power in the clashes between Russia and post-Soviet countries and in this sense, they compose a significant dimension of the interstate relations in this geography.”

In conclusion, the Azerbaijani petition proclaimed that such racist sentiment should not be tolerated, as a young Azerbaijani man lost his life because of it and they called upon President Putin to do something about it: “More than 10 million people live in our country. These are people of different ethnic, linguistic groups and nationalities. And all of them today with intense attention await a just decision from you. We believe that the people involved in this dirty story with the murder of Abdullayev should be justly punished.”