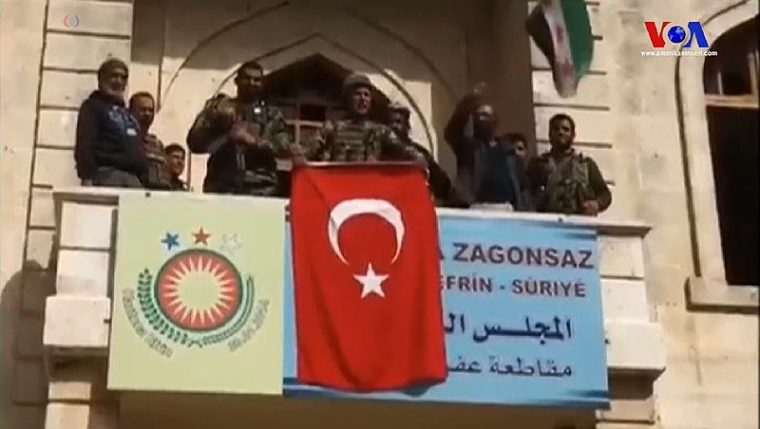 Kurdistan 24 recently reported that Syrian jihadists abducted three Kurdish men in the Afrin region. According to the report, the Levant Front, otherwise known as Jabhat Al Shamiyah, a Turkish-backed Syrian jihadist group, stands behind the kidnapping of Mistefa Nasir Hemke, Ebdin Izet and Hemude Hesen Ibe in the Afrin region. The victims whereabouts are presently unknown.

Paulo Casaca, a former European Parliamentarian, stressed in an exclusive interview: “Under the protection of Turkey, terrorist groups have been committing numerous human rights violations against minorities in Syria. The disappearance of people, including women, have been widely reported in the last few years. As the new year begins, these actions are being reported on again.”

Mahmoud Abbas, a Syrian Kurdish dissident and commentator in the Kurdish media, concurred in an exclusive interview: “This has been going on since 2018, when Turkey occupied Afrin. The plan was to empty the Kurdish area and to change the demographics, exactly like the Baathists did before them. So, they captured people randomly and gave various excuses for their abductions, claiming that they were PKK or were part of a Kurdish militia. In this way, they deported around a million people from the Afrin region when there was active fighting under the guise of helping the Free Syrian Army.”

However, Abbas noted that in recent times, since the fighting has ended, there have been some Kurds who have attempted to return to their homes in the Afrin region, yet these Kurds have faced stiff opposition: “They now are trying to scare the people who come back by falsely accusing them of being PKK. Under this pretext, they torture the people that try to come back.”

According to Abbas, the Turkish-backed Syrian jihadists are doing this for two years: “Firstly, they don’t want the Kurdish people to leave Rojava and return to Afrin. Secondly, they want the people who have not yet left to leave. In this way, they can say that Afrin is Arab and not Kurdish. Back in 2018, human rights organizations claimed that Afrin was 90 percent Kurdish, yet today it is only 30 to 40 percent Kurdish. Back then, there were 25,000 Yezidis in the Afrin area. Now, there are no more than 2,000 Yezidis in the Afrin region.”

Unfortunately, Abbas claims that the international community is not doing much to change the status quo in the Afrin region: “When the Biden administration speaks to Putin, they do not talk about Afrin because they got some kind of understanding with the Turkish army. Russia and Trump allowed Turkey to occupy Afrin, so negotiations don’t discuss the issue. Thus, sadly, everything stays between Russia and Turkey, and this is one of the greatest problems.”

According to Abbas, “We don’t see anyone talking about this issue except human rights organizations. Neither Europe nor the Biden administration or even the Syrian opposition discuss this issue, as it is part of the political umbrella between Russia and Turkey. And in Sochi, they only spoke about Afrin as something to barter on: ‘If you don’t do something in Idlib, then we don’t do in Afrin.’ So, they discuss other issues, not Afrin.”

“It is high time for the Europeans and other members of the international community to acknowledge that the refugee pressure exercised along the European borders by the enemies of Europe starts with Europe’s indifference for human rights and the victims of terrorism in areas like Afrin in Northern Syria,” Casaca concluded.