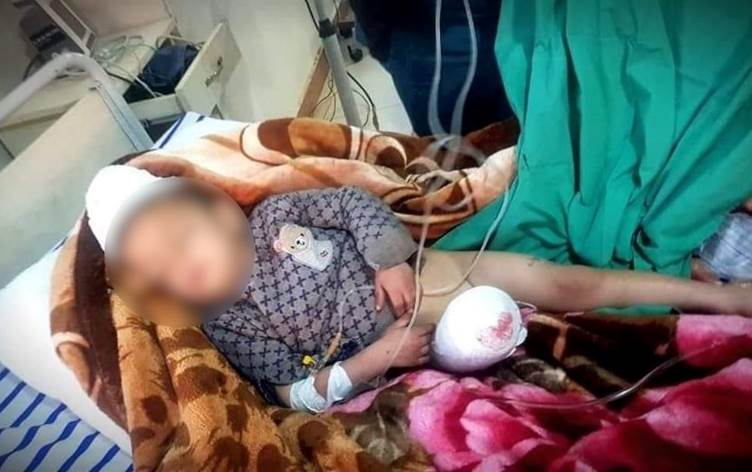 According to the Kurdish media, Abdou Mustafa Hanifi. a four-year-old Kurdish child, lost his leg in an attack upon Kobani in Syria. The Syrian Observatory for Human Rights noted that around 15 villages in the Kobani area were attacked, killing one and wounding 12 others, including women and children. The Syrian Democratic Forces blamed the attack upon Turkey. The Turkish military confirmed that they attacked Kobani and Qarmag, claiming that they were going after the PKK.

In an exclusive interview, Syrian Kurdish dissident Mahmoud Abbas proclaimed: “There is no longer a difference between Erdogan’s government and Bashar Al Assad’s regime. Both to reach their goal will kill children, women and the elderly, and destroy safe havens by indiscriminate bombing. This is what prompted the Turkish government to bomb 15 safe villages in the Kobani area, which led to the cutting off of four-year-old child Abdullah Mustafa Hanifi’s leg and the killing of several women and elderly people from these villages.”

Human Rights Watch stated in a recent press release, “The war in Syria has killed at least 350,000 people, forced over 12 million to abandon their homes, and left more than 12.3 million Syrians hungry. While parties on all sides to the conflict have committed serious crimes, Syrian government and pro-government forces account for the majority of atrocities committed against civilians.”

According to their statement, “There is the violence above ground: the bombing of hospital, markets and schools, as well as the deadly chemical weapons attacks against civilians, including children. But there is also the violence that is not readily visible: the hidden prisons and torture centers, into which tens of thousands of Syrians have disappeared – sometimes to re-emerge years later, sometimes never to be heard from again.”

As we speak, a Syrian intelligence officer is on trial in Germany for “4,000 counts of torture, 58 killings, and for rape and sexual assault committed while he allegedly headed investigations at a military intelligence facility known as ‘Branch 251’ in Damascus.” The verdict and sentence are expected this month.

According to Abbas, Erdogan should face similar treatment in light of his actions in Kobani and other areas of Syria: “This is a crime against humanity that must be punished according to international law and humanitarian norms. This is not the first time that Turkey bombed civilians and excused it as being part of the struggle against the PYD or PKK, thus destroying the autonomous administration. In fact, their main goal is to push them to migrate from West Kurdistan.”

“Unfortunately, international reluctance combined with American and Russian interests have allowed Erdogan and Bashar Al Assad to persist in their crimes,” he noted. “Failure to deter Erdogan will cause these crimes to continue. We call upon human rights organizations and member states of the United Nations to request that the UN Security Council and the Hague prosecute Erdogan for his crimes against the Kurdish people in Western Kurdistan and the Syrian people in general.”

Abbas added that Syrian jihadists backed by Turkey abducted more than 700 Kurdish civilians and wounded dozens of women and children in 2021: “This includes the latest crime against the four-year-old boy Abdullah Mustafa. Please post the following hashtag: #I_Am_Not_A_Terrorist_I_Need_My_Leg.”

In recent days, Nadine Maenze, the US Commissioner for Religious Freedom, condemned Turkey’s attack upon Kobani: “Just hours after arriving in North-East, Syria, Turkey conducted a drone strike on civilians in Kobani, killing 1, injuring 11, including the four-year-old boy who lost his leg. Drone attacks upon civilians is destabilizing north-east Syria.”

She added: “Turkey says that they’re targeting terrorists, but clearly that’s not the case. In the areas that Turkey has invaded in Northern Syria, we are witnessing egregious religious freedom violations, and horrific crimes against Christians, Yezidis and others, especially women in these communities. Its important for the US and the global community to stand up to these strikes and to push Turkey to stop.”