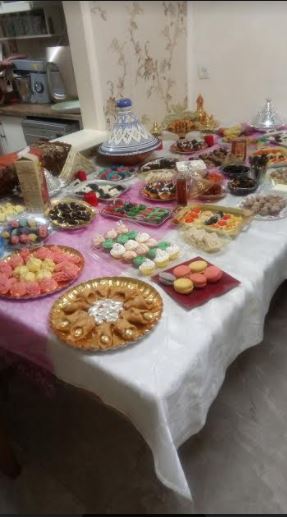 In a recent Facebook post, MK Ayoob Kara proclaimed: “I want to wish the entire Moroccan Jewish community a happy Mimouna. This particular Mimouna is especially joyous as most of Israel has already been vaccinated and Israelis were able to celebrate the holidays properly this year, full of joy and happiness, after a year of sorrow and depression caused by the pandemic.”

MK Kara also noted that this year Israelis are celebrating their new peace treaty with Morocco, which is an especially important accomplishment for the Moroccan Jewish community: “Now, Israeli citizens will be able to fly to Morocco and to enjoy everything that this rich and magnificent culture has to offer.”

Mimouna is a Moroccan Jewish pastry festival that is celebrated at the end of Passover every year. On this occasion, Moroccan Jews celebrate that they are once again able to eat chametz. On Mimouna evening, they dress up in traditional Moroccan costumes, snack on pastries, and eat mufletas and birkoush. They also usually dance to Moroccan music. The following day, there is a BBQ,

Mimouna is a celebration of spring, togetherness, freedom, friendship and hospitality, all values that have increased importance after we experienced the coronavirus pandemic. There are different theories regarding the origin of the holiday. There are those who argue that the holiday honors Rabbi Maimon ben Yossef, the father of the Rambam. They believe that he was either born or died on this day. Maimon was an important figure in Moroccan Jewish life, having worked extensively on promoting Muslim-Jewish relations. In the era of renewed diplomatic relations between Israel and Morocco, Rabbi Maimon ben Yossef can serve as an inspiration for what we all seek to accomplish.

Others stress that Mimouna derives from the Hebrew word for “faith” and “belief,” a reflection in the idea that Mimouna celebrates trust in G-d. This theory suggests that the holiday signifies both the past redemption from the Egyptians and the future redemption in the messianic era. In the Talmud, it is written, “Just as they were redeemed in Nisan from Egypt, so too in Nisan they will be redeemed again.” Following the pandemic, may we all witness a new redemption and be liberated from every form of suffering and bondage.