Economic Peace Center > Azerbaijan > Aghdam refugee: “Imagine what it is like to open your eyes and see you got nothing”

Aghdam refugee: “Imagine what it is like to open your eyes and see you got nothing” 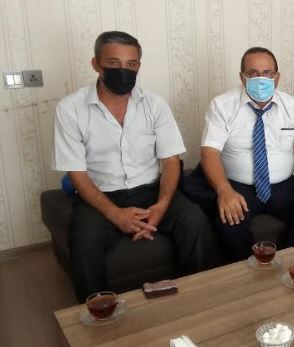 During Ayoob Kara’s recent visit to Azerbaijan, he visited the Masazir refugee camp, where he met with an IDP from the Aghdam region. On July 23, 1993, Aghdam was occupied and destroyed. On that tragic day, Armenia transformed a vibrant city with a population of tens of thousands of people, who lived in Soviet-style high rises, into a ghost town.

They did not even spare the city’s historic tea house and Bread Museum, which was a UNESCO World Heritage Site. The city’s mosque was left without a roof and was labeled as an Iranian mosque, a further insult to the Azerbaijani people. On top of that, a beautiful mural was laid waste and surrounded by vast ruins, which put the ghost towns of the American Wild West to shame.

Talib Mammadov, an IDP from the Aghdam region, stated during Ayoob Kara’s visit: “In Aghdam, there were many things: A cinema, a theater, factories, farms, etc. Aghdam specialized in grapes. They produced wine. They had very famous wine. Before the occupation, it was one of the richest regions of Azerbaijan because of trade in that region. In Aghdam, you could find many things that you could not find elsewhere in the Soviet Union, like leather jackets. That is why Aghdam was important for Azerbaijani trade. There were a lot of people in that region.”

“In 1993, when Aghdam was not yet occupied, I was in the military service,” Mammadov recounted. “I was fighting for the homeland. I left Aghdam during the war.” Nevertheless, he noted that his family suffered during the war immensely: “In our family, there was a mother, father and three brothers. During the First Karabakh War, all four men in my family got injured.”

“I also got injured in the war in the abdomen in January 1994, one year after Aghdam was captured,” he added. “After that, my life changed. Everything changed. My life condition became exceedingly difficult, as did my social condition. I lost my homeland and realized that I had to move to another place. Furthermore, I was incredibly sad that Agdham became a ghost town without people.”

According to Mammadov, the tragic fate of Aghdam killed his mother: “Imagine what it is like to open your eyes and one day see that you did not have anything, and that you have to move to another region for God knows how long. The taste of food, the taste of water, everything is different. That is why my mother passed away in 1998, for it was exceedingly difficult for her.”

Today, Mammadov is living in the Masazir refugee camp together with his wife and children: “In the beginning, it was psychologically difficult to move into a refugee camp. From 1993 to 1995, we did not have a home.” However, eventually the government gave him a home in the refugee camp, although with the liberation of the Karabakh region, he hopes to return to his home and that Aghdam will be rebuilt to be a great city once again.