Economic Peace Center > Azerbaijan > Azerbaijan’s President: “It was the likes of Serzhik Sarkisyan who lost the war”

Azerbaijan’s President: “It was the likes of Serzhik Sarkisyan who lost the war” 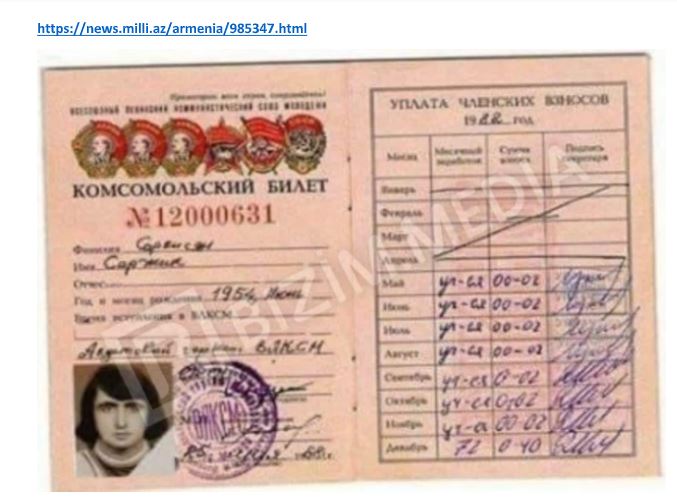 In a recent press release, Azerbaijan’s President Ilham Aliyev spoke about the genuine name of former Armenian President Serzh Sarkisyan, also calling him a war criminal and claiming that he admitted responsibility for the Khojaly genocide in an interview with a British journalist. He also blamed him for Armenia now losing the Second Karabakh War to Azerbaijan: “I did not call him Serzhik Sarkisyan to belittle him, but because that is his real name and surname.”

“We have this information in our archives,” he noted. “His birth certificate and his Komsomol ID state that his name is Serzhik Sarkisyan. Then he changed it to Serzh Sarkisyan, as if Serzh is more acceptable. I call him a traitor and this is not an insult. He has been a traitor at every single step.”

According to him, Serzhik showed up at the front during the Second Karabakh War and fled together with 10,000 Armenian deserters. He failed to stay and fight: “You cannot make a hero of yourself by sitting and crowing in Yerevan.”

While Serzhikh now blames Pashinyan for losing the war, Azerbaijan’s president claims that this is inaccurate: “Pashinyan came to power in 2018. Could he have built an army in just two years? Or could he have defeated a strong and formidable army like ours? It is Serzhik who created that army. Serzhik was the minister of defense in Armenia. Serzhik was the prime minister of Armenia. He was the head of the Presidential Administration and head of the Ministry of Security. He was president for 10 years. Who created this army if not Serzhik? By crushing that army, we have destroyed Serzhik and those like him.”

Azerbaijan’s President Ilham Aliyev goes into great detail demonstrating how Serzhik is a traitor. “Firstly, towards the people of Azerbaijan whose bread he had been eating,” Azerbaijan’s President stated. “Secondly, towards Gevorkov, the former first secretary of the Nagorno-Karabakh Autonomous Region, as he was his aide, he carried his briefcase for him. This is part of his biography. He may have had this deleted, but it is still available in our archives. His appointment was authorized in Baku. We have everything in our archives.”

According to him, “Serzhik Sarkisyan was formally Boris Gevorkov’s assistant, but he was actually his servant, a kebab maker, and a party organizer. What happened then? Then, as soon as the separatist movement began, Serzhik betrayed Gevorkov. That was the second act of betrayal.”

“The third act of betrayal was against his leader Kocharyan,” Azerbaijan’s President noted. “Now there is no one in Armenia who wouldn’t know this. It was Kocharyan who took Serzhik by the ear and took him from one office to another. He had him appointed to all positions. He also forcibly had him appointed as president. But the Armenian people hated Serzhik. What happened after that? Less than a year later, he betrayed Kocharyan too and did not even answer his phone calls. Notice how lowly this specimen is.”

Azerbaijan’s President noted that Armenian people kicked Serzhik out of power in 2018, after he committed a massive election fraud: “This man is widely ridiculed, mocked, and hated in Armenia. So many of his criminal relatives were arrested. He has a close relative who went into hiding abroad, received a Guatemalan passport in Colombia and also changed his name. Just like Serzhik made himself Serzh early on, his relative also gave himself the name of Gonzalez. They grabbed him by the ear and arrested him. He stayed tight-lipped in fear. What can he say after all? But he seems to have reemerged after the war. If it hadn’t been for the war, if it hadn’t been for this bitter defeat, Serzhik would be in prison now. A thief like him may not have been born in our region yet.”