ANALYSIS: How Bennett’s Meeting with Putin Affects Israel and the Region 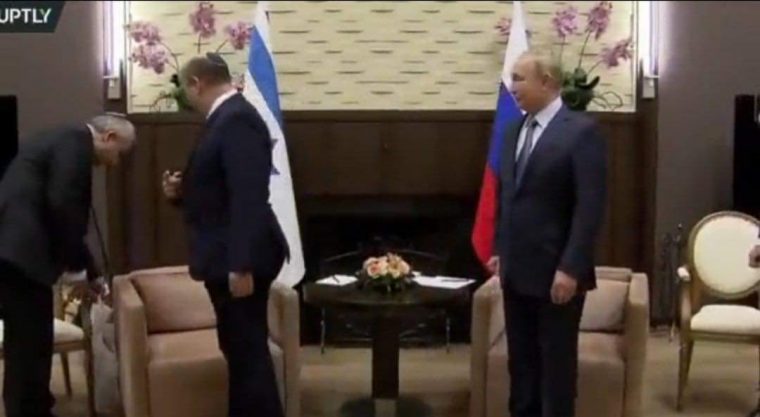 Will Israel be free to exercise deterrence in Syria and in other enemy states of the region?

On Friday, Israeli Prime Minister Naftali Bennett met with Russian President Vladimir Putin in Sochi, where they discussed the Iranian nuclear program and the situation in Syria. Israeli Prime Minister Naftali Bennett described the meeting as “excellent,” stressing on his Facebook page that it lasted over five hours and was “particularly in-depth.”

According to the Prime Minister, “Relations between Israel and Russia rely on a rich past of relations between the two peoples. We always remember the crucial role of the Russians in the defeat of Nazism during World War II. This historical memory must not be erased and must be passed down from generation to generation.”

Likewise, Russian President Vladimir Putin hailed Russian-Israeli ties as “unique,” emphasizing: “the very deep connection between our people.” The question remains, how did the recent meeting between Bennett and Putin affect Israel’s freedom to operate in Syria?

According to Al Jazeera, Putin stressed that Russia has been making great strides to restore Assad’s sovereignty since the Civil War erupted there and there is “common ground and opportunities for cooperation” with Israel regarding the situation there, especially “in terms of the fight against terrorism.”

When Benjamin Netanyahu was Prime Minister of Israel, there was a mechanism in place, whereby Israelis could target Iran in Syria if they notified the Russians in advance, so that there would be no collision between Israeli and Russian forces. In 2018, a Syrian airplane aiming for Israeli jets accidently took down a Russian aircraft, killing all 15 people on board.

After that, Russia sold Syria the S-300 Air Defense System, so that they could better defend themselves against Israeli aircraft. Nevertheless, the Russians tacitly gave the Israelis permission to act against Iran in Syria — until Bennett took over. Since Bennett became Prime Minister, there has been intense friction between Jerusalem and Moscow over Israel’s actions in Syria.

Nevertheless, after Bennett’s meeting with Putin in Sochi, it was reported that Israel will have the ability to continue to strike at Iranian targets in Syria, provided the Russians are given even more advanced warning than they were given previously. Haaretz reported that Putin asked Israel to be “more precise” in their warnings.

In an exclusive interview with Israel Today, Ayoob Kara, who served as Israel’s Communication, Satellite and Cyber Minister under Netanyahu, chastised Bennett, claiming that what he did in Russia was nothing more than damage control: “Bennett did bad for Israel by not fully appreciating the importance of Russia when he took over, and he is trying to make it better now with this meeting. However, he looks not serious [like a lightweight].” He noted that although he will continue Netanyahu’s policy for now, he questions whether Bennett has the strength to do what needs to be done to keep this crucial mechanism in place.

In an interview with Israel Today, Former Israel Consul General Dr. Yitzchak Ben Gad proclaimed: “From Bennett’s point of view, he wants to prove that he can meet with Biden, Putin, Sisi and so on, which shows that life continues after Bibi. However, he does not have the freedom in this coalition to do anything against the right or left, or the coalition will collapse. From Putin’s point of view, he is continuing his policy that he had with Netanyahu. Russia does not want Iran to control Syria and Iraq, and to strengthen Hezbollah.”

Kara added that it is thanks to Assad and not Bennett that Russia went back to this mechanism: “Russia also understands that Iran having much power is dangerous for them [Syria] also. At last, the behavior of Assad in recent weeks was closer to Russia and not Iran. Assad began a new relationship with the Jordanians and the Egyptians; and they are on the other side, the side of the Saudi Arabian coalition.”

“If Assad has the power, he does not want to be in the hands of Iran because he wants to assert his own sovereignty,” Kara added. “Assad wants a good relationship with Iran but does not want them to stay in Syria because this causes Israel to attack them, and he doesn’t need this. He needs the Iranians to be far away from Israel for this gives him a chance to control the area without problems.”

Due to this reality, already, there were reports that Iran has reduced its activities in the Damascus Airport area and cut down on the number of terrorists it has operating in the war-torn country, from 20,000 to 10,000. According to the report, this was due mainly to pressure from the Russians and the Syrian regime.

This report was published around the same time that it emerged that Israel attacked several Iranian positions in Syria, killing a Syrian soldier and three other pro-Iranian fighters. That attack came after another one in the Homs area and around the same period a former member of the Syrian Parliament was killed by a sniper near the border with the Golan Heights. Israel routinely targets Iranian elements in Syria, stressing that they will never permit Iranian encroachment along their borders. Considering this, Russia views Iran’s presence near Israel’s borders to be something that destabilizes the Assad regime and that is against their interests.

The Russians would like for Syria’s relationship with the other Arab countries to be repaired and for Bashar Al Assad to join the Arab League once again. They would also like other Arab countries to invest in the reconstruction of Syria, which was destroyed during the civil war. According to a report in MEMRI, Jordan with the backing of Russia has been promoting a “step-by-step approach,” where Syria would “gradually change its behavior” in return for incentives that would reflect “positively on the Syrian people and the return of the refugees.” This document also calls for curbing Iranian influence in the region and for the withdrawal of all foreign forces from the area, in addition to securing the borders with Syria’s neighbors.

According to the report, Jordan, Egypt, the UAE, Iraq, and others in the region have been warming their relationship with the Assad regime based on the understanding that “Assad is here to stay” and that it is preferable to get him to change his behavior, rather than to replace his government and risk ISIS, Al Qaeda, the Al Nusra Front or the Muslim Brotherhood taking over the country.

It should be noted that the Jordanians, like the Israelis, also don’t want the Iranians to encroach upon their borders and that King Abdullah even appealed to Putin regarding this as well. However, it should be stressed that according to the MEMRI report, Russia has not been entirely successful in curbing Iran’s influence near Jordan’s border. Nevertheless, when Syrian Defense Minister Ali Ayyoub visited Jordan, he did promise to push Iranian elements away from the Jordanian border, giving hope that something similar could be arranged for the State of Israel.

This article was originally published in Israel Today