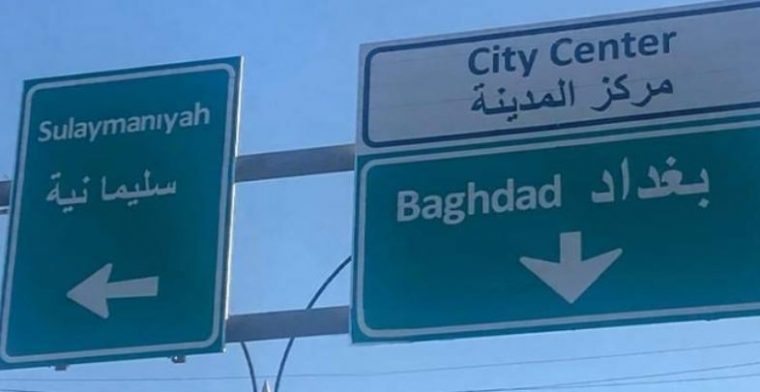 According to a report in Kurdistan 24, the Kurdish language was removed from all signs in Kirkuk. As a result, in the city, only Arabic and English were viewed temporarily, even though the city is historically Kurdish. After objections by local Kurdish politicians, they added back the Kurdish language signs.

In an interview, Sirwan Mansouri, a Kurdish journalist based in the Middle East, stated: “Language has historically been the most important cultural symbol for a nation. It is even more important for the Kurds because they are a divided nation whose lands are occupied by others, so nothing remains for them except their language. Historically, much effort has been made to obliterate the Kurdish language, but so far they have not succeeded.”

According to Mansouri, “After Saddam Hussein’s regime was overthrown in 2003, Article 4 of Clause 1 of Iraq’s constitution states that the official languages are Arabic and Kurdish. The new constitution also included Article 104 which explicitly emphasized that the future of disputed areas like Kirkuk would be determined by a referendum. Not only has the Iraqi government not been committed to the constitution till new, but they occupied Kirkuk with the backing of Iranian militias, prompting the Kurds to lose control over the city, which originally was governed by the Kurdistan Regional Government.”

Mansouri claims that the status of Kurds in Iran is even worse than it is in Iraq, as there the only official language is Persian: “According to Article 15 and 19 of Iran’s constitution, teaching and learning other languages in school is allowed, but it does not happen. Studying Kurdish language in schools and universities is forbidden and Kurdish children are forced to study in Persian from age 6. Although they let some books and magazines to be published in Kurdish, the content of such books and magazines is heavily censored by the government.”

Mansouri stressed that there are up to 15 million Kurds living in Iran, but “they have no right to teach and learn their mother tongue. A Kurdish girl named Zahra Mohammadi, who was teaching Kurdish to children as part of her work for an NGO named Nojin, was arrested and sentenced to five years in prison. Recently, a secret letter was revealed in which the government ordered that the names of shops, stores, streets, etc. must only be in Persian.”

According to Mansouri, “Furthermore, the Iranian government does not grant identity cards and birth certificates to children with Kurdish names, so parents are often forced to change their children’s names to Persian names. The Iranians only recognize Persian identity and consider all other nationalities in Iran including the Kurds to be merely tribes or subnations. They do their best to remove Kurdish names from streets, roads, villages and even mountains and rivers.”

However, Mansouri claims that the Syrian regime behaves the worse towards the Kurds: “The plight of the Kurds there is even worse than it was in the past. There are over one and a half million Kurds without ID cards and birth certificates there. They are not allowed to speak Kurdish in public. Their education is just in Arabic. The names of cities and towns were changed to Arabic names. For example, Kobani, a very important Kurdish city in Syria, became Ain Al Arab. After the civil war led to a semi-autonomous region, the conditions got better in those areas, and they once again returned the names of cities and villages to their original Kurdish names. However, the Assad regime has tried several times to take back control of the Kurdish areas, but the regime is not powerful enough to do so.” However, Syrian jihadists did take over some of the Kurdish areas in 2018 and the plight of Kurds in those areas is not good. But, in the areas not controlled by either Baathists loyal to Assad or Syrian jihadists, “The Kurds have some freedom, and their condition is getting better.”

In conclusion, Mansouri declared: “There are some who are doing everything to prevent the Kurds from learning, speaking and teaching in their mother tongue. The targeting of the Kurdish language is designed to obliterate Kurdish ethnicity, as the language symbolizes their ethnicity. This is a form of cultural genocide, which must be condemned by the community of nations.”