Azerbaijani Religious Leaders: “People Are Still Getting Killed In Karabakh” 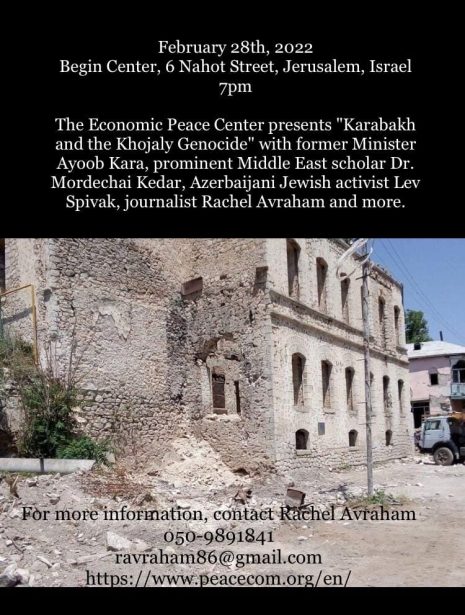 Azerbaijan’s President Ilham Aliyev stressed the need for stronger international support for Azerbaijan’s efforts to demine the Karabakh region. Nigar Arpadarai, a member of the Azerbaijani Parliament, recently concurred in an article published in the EU Reporter, where she claimed ahead of the 30th anniversary of Armenia’s illegal occupation of Karabakh: “Since the end of the fighting in the liberated areas, multiple people have tragically died as a result of landmine explosions.”

“The twin projects of repopulation and reconstruction of the newly liberated territory are being seriously challenged by hundreds of thousands of landmines planted there in random places – even in cemeteries,” the respectable Azerbaijani MP noted. “Indeed, many of these landmines were planted by the occupying Armenian army just before they left. We liberated our lands, but it will take us years and tens of billions in investment to make them livable for our people once more.”

In her article, she added: “Armenia was never under any direct or indirect sanctions for what it did. Azerbaijan never received any meaningful support in its efforts to liberate or rebuild the territory.”

Around the same period of time, a joint statement was issued by Sheikh-ul-Islam Allahshukur Pashazadeh, Chairman of the Caucasian Muslims Board, Archmandrite Aleksiy, Secretary of Baku and Azerbaijan Diocese of the Russian Orthodox Church, Milikh Yevdayev, Head of the community of Mountain Jews in Azerbaijan, Robert Mobili, Chairman of the Albanian-Udi Christian religious community in Azerbaijan, and Aleksandr Sharovski, Head of the community of European Jews in Azerbaijan. They proclaimed: “Despite the end of the war and the aggression, innocent people are still being killed in the liberated lands, because Armenian aggressors planted hundreds of thousands of mines both during the 30-year occupation and when leaving Azerbaijan.”

According to their statement, “In blatant disregard for international law and humanitarian principles, Armenia avoids providing mine maps or presents false maps that do not correspond to reality. After the war, Armenian religious leaders issued revanchist statements, calling on their people not to support peace that is so necessary for the region, but to support a new war. We reiterate to the world community that as a result of Armenia’s baseless territorial claims and aggressive policy, 20% of the internationally recognized territories of the Republic of Azerbaijan were occupied for nearly 30 years. Ethnic cleansing, physical and moral terror were carried out against the Azerbaijani people. Humans were expelled from their ancestral lands in Armenia and the Karabakh region of Azerbaijan and became refugees and internally displaced persons. Their human rights were grossly violated. Hundreds of cities and villages, the ancient and rich cultural heritage of the Azerbaijani people, were destroyed and looted.”

The religious leaders noted that the Armenian occupation followed the Khojaly genocide, where “613 Azerbaijanis, including 63 children, 106 women, and 70 elderly people, were brutally killed because of their ethnic identity. With unimaginable cruelty, 8 families were completely annihilated, 25 children lost both parents, and 130 children lost one of their parents… Even the civilian population, who tried to escape barefoot in the frosty weather, was not spared. They were persecuted and killed on the roads and in the forests by the Armenian military with extreme cruelty. As a result of this inhuman crime, 487 peaceful civilians were seriously injured, 1275 people were taken hostage and subjected to horrific tortures. The corpses were subjected to inhuman affront and outrage. The destiny of 150 hostages, including 68 women and 26 children, is still unknown.”

“We bring to the attention of the world community that Armenia, along with its policy of occupation, ethnic cleansing and genocide, has committed during the 30 years of occupation spiritual aggression and genocide against the religious, cultural and historical heritage of Azerbaijan,” the religious leaders added.

“Muslim and other religious temples in those areas, including Russian Orthodox churches, cultural and historical monuments, and cemeteries, were subjected to Armenian vandalism for many years. Ancient Albanian Christian churches were attempted to be Armenianized. Armenia, which completely destroyed 65 of the 67 mosques in the region, turned mosques into barns. They even insulted them by keeping there animals forbidden in Islam.”

Indeed, what Armenia did to Azerbaijani mosques in Karabakh has an uncanny resemblance to how the Spanish Inquisition treated synagogues following the Reconquista of Spain.

Ayoob Kara, who served as Israel’s Communication, Satellite and Cyber Minister, stated that the destruction he witnessed in Karabakh was worse than what he witnessed in Southern Lebanon. Other commentators have claimed that the area is the “Caucasian Hiroshima,” as the Armenians did not even spare the cows in the field, the trees in the forest and the fish in the river. They completely destroyed the land, rendering it uninhabitable.

In conclusion, the religious leaders in Azerbaijan stated: “It is our human duty to the souls of the martyrs to inform the world community about Armenian aggression against Azerbaijan and its consequences, and to highlight the truth about Armenian vandalism committed in the occupied territories in all its horror… The religious denominations in Azerbaijan declare their support for the end of any military aggression, calls for war and hatred, religious and ethnic intolerance, revanchism in our region, for the establishment of good neighborship, peace and tranquility between states and peoples.” They called on “the World’s Religious Leaders, International Organizations, the Parliaments and the World Community to mobilize for these high aims and especially call on the Armenian Apostolic Church to promote human values, as well as ideals for peace and reconciliation.”