Khojaly Genocide Day commemorated at the Begin Center in Jerusalem 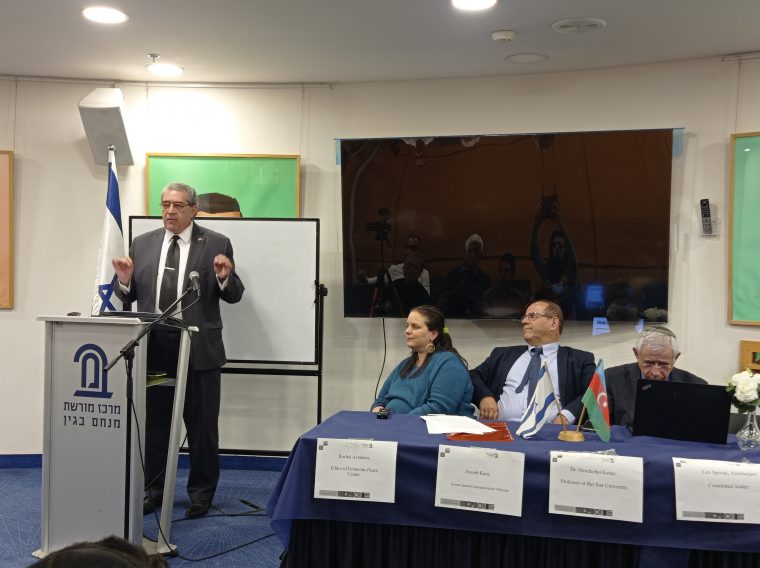 The talk began with Esther Ha-Levi, a Canadian Jewish activist of Azerbaijani origin, speaking about how the Khojaly Genocide affected the local Jewish community. According to her, “For me, it is very personal. In the late 1980’s, when the Armenians invaded and occupied Azerbaijan, I was a child. I was a teenager during Black January when all of those tanks were on the street. Something similar is happening today in the Ukraine. For me as a child seeing Russian tanks on the street, it was horrendous. Watching Azerbaijani refugees coming from Armenia who were tortured, more than 750,000. When you watch a documentary about Khojaly, it is de ja vu. It is like watching Jewish children and women during the Holocaust and seeing what the Nazis did to them.”

According to her, “The saddest thing is that today we have to advocate and demand that this tragedy be recognized. Recently, we petitioned the Canadian government to recognize the Khojaly Genocide. Why do we have to do that? There are documentaries. What the Azerbaijanis are going through is similar to what the Jews and Israel are going through. People are believing the false propaganda that is spread. Just like the BDS is succeeding, it is the same thing with the Armenian lobby. Innocent women and children were killed. 613 people were brutally slaughtered. More than 1200 were taken hostage. Many were missing. They were trapped. They brutally killed, murdered and raped.”

One may ponder, how did the Khojaly Genocide affect the Azerbaijani Jewish community? Ha-Levi proclaimed, “Azerbaijan is a center of multiculturalism. Jews have always played a pivotal role in Azerbaijan. We never experienced anti-Semitism. Across America and Europe, Jewish and Israeli students are under attack, something that will not be allowed in Azerbaijan, not even close. In Azerbaijan, we say with pride that we are Jewish and we love Israel. We did not leave Azerbaijan because of anti-Semitism. We left Azerbaijan because of instability. So much false propaganda in the West is being spread against Azerbaijan. The Armenian Lobby is strong. It is very difficult, just like it is for Israel. We have to prove that Israel is fighting for its survival, just like Azerbaijan. We have to justify why we have to defend land that belongs to Azerbaijan. It is our duty to tell the truth to the world about what happened in Khojaly. We have to make sure that what happened in Khojaly won’t happen to any other nation in the world.”

Azerbaijani communal leader Lev Spivak added: “What happened in Khojaly became a symbol for the entire catastrophe that happened in Karabakh. The Armenians did the same thing not only in Khojaly but in many other places too. I was in Karabakh. It is hard to believe what happened there. There are homes with only one wall. How did that happen? The Armenians sold the homes to the Iranians for 200 dollars per house. Who would buy a house in a time of war? Not even for 2 dollars. But the Iranians did not buy them to live there. They bought them and took all of the construction material and took it to Iran. Who would buy a home just to take away spare parts and destroy the rest?”

He added, “In Aghdam, I saw two things that were very shocking. One of them is the Bread Museum. It was a museum for everything connected to bread. In there, they had a tiny piece of bread that was given to them by a woman in Leningrad, which she received as rations during the time the Nazis were surrounding Leningrad. They did not have what to eat. That tiny piece was their normal. It was destroyed by the Armenians. Who destroys a museum like that? Who destroys a tiny piece of bread like that? How is that possible?” According to Spivak, “Not far from there, there was a cemetery.” He noted that in that cemetery from the Soviet period, the Armenians dug up the bodies from the graves so that they could remove gold teeth and other valuable items from the grave.”

Rabbi Zamir Isayev stressed: “Until today, no one from the Jewish community of Azerbaijan can understand how such things could be done to women and children and all the people. I think that all the world should pay attention and recognize it as a genocide, as they recognize the Holocaust. I think its not important how many people were victims of the genocide. Numbers are not important. If somebody was killed because of his nationality and we know that in the Holocaust we were killed because of our nationality, and Azerbaijanis were killed only because they were Azerbaijanis, it is genocide. We learned from the history and are doing everything so no one will forget about this.”

In my speech, I concurred with Isayev: “According to international law, this fits the criteria for genocide, as the UN Convention on the Prevention and Punishment of the Crime of Genocide defines any of the following acts committed with the intent to destroy, in whole or in part, a national, ethnic, racial or religious group as genocide: a) killing members of that group; b) causing serious bodily or mental harm to the members of that group; c) deliberating inflicting on that group conditions of life inflicted to bring about its physical destruction in whole or in part; d) imposing measures intended to prevent births within the group; and e) forcefully transferring children of the group to another group.”

I added: “Thus, in Khojaly, Armenia set out to destroy the population of an entire city by either murdering them on the spot or starving and torturing them to death in captivity. They caused an entire city’s population serious bodily and mental harm via the vast destruction as well as the torture and primitive conditions in which the hostages were held. And by raping the women, they created psychological barriers for these women to ever be able to procreate again, thus “preventing births” within that group. Therefore, Armenia without a doubt committed a, b, c, and d with the intent to destroy part of the Azerbaijani population, the entire city of Khojaly. 800,000 other Azerbaijanis would be ethnically cleansed from the Nagorno-Karabakh region and other cities like Agdam would be transformed into ghost towns around the same period.”

International human rights lawyer Irina Tsukerman proclaimed: “As a lawyer, I have to deal with atrocities and crimes against humanity on a daily basis. It very often begins with a government action of sort that leads to a massacre or genocide. It does not start with random people who go after their neighbors. Even if there are tensions, it takes organization. It takes intent to carry out an attack of that sort, like what happened in Khojaly. Khojaly was not a spontaneous event. It was organized. It included a series of events including an incursion into Azerbaijan’s territory. This laid the foundation for the occupation of Azerbaijan’s Karabakh region for thirty years, which resulted in its liberation during the Second Karabakh War. Unfortunately during this time, it included a mass refugee crisis and trauma. It all started with Khojaly and similar events.”

Tsukerman added: “Back then, the Soviet Union had a policy of instigating ethnic and religious tensions, creating polarization and divisions, and dehumanizing groups of people that were able to coexist prior. It created fictitious territory for the purpose of dehumanizing and fomenting a false history. The Soviet Union backed anti-Azerbaijani sentiments, which led to the tensions with Armenia. It led to horrific atrocities and a great tragedy. Khojaly was a grave tragedy. Unfortunately, there has never been closure from that incident, as the perpetrators were never brought to justice. Today, Azerbaijan is pursuing its claims against war criminals in the international courts. We are hoping that these claims will be reviewed and lead to good results and the international community will impose some level of justice for the war crimes in the Karabakh war who targeted civilians. The same should be done in Khojaly not only for the survivors but to bring to an end a period of history that has never fully divested from the current circumstances and has continued to inspire illegal and tragic actions.”

According to Tsukerman, “There are no statutes of limitations on crimes against humanity that they perpetrated as a result of state action. It is not too late to state these claims and to push for actions and to impose sanctions on the responsible parties until they either prosecute themselves or the international community does so. The same people who made Khojaly possible have created a system of propaganda with continued dehumanization of Azerbaijanis till the Second Karabakh War. We see echoes of it in the international media. We are now seeing the same kind of thing with Ukraine. It is rooted in the same mentality. The failure to hold the Khojaly human rights abusers and violators responsible in time has allowed impunity to take root until it was stopped by force during the Second Karabakh War. The Azerbaijani government behaved justly under those circumstances and achieved justice for its people and prevented an escalation in the situation.”

In conclusion, Tsukerman proclaimed: “The Azerbaijanis should continue to stand for justice. They are fighting for self-defense. They are continuing as a humanitarian leader under these circumstances, helping in the Ukraine as well. This is how a country should conduct itself when injustice is not prevented internationally. Khojaly now has become a much more known event. The push by Azerbaijan and its friends around the world has been tremendous. It is important to continue collaborating to bring this knowledge to schools and universities.”