Economic Peace Center > Articles > Kara: “I will do everything to support Azerbaijan”

Kara: “I will do everything to support Azerbaijan” 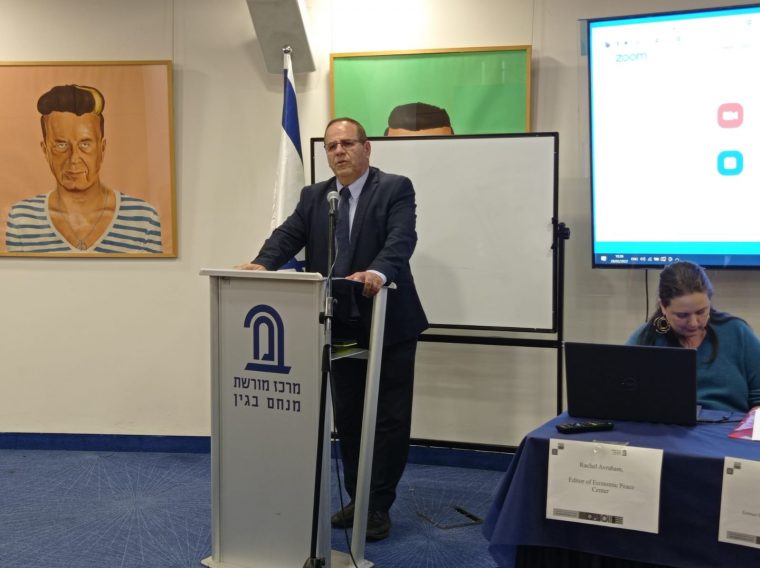 Recently, the Economic Peace Center held a conference in Jerusalem at the Begin Center on Karabakh and the Khojaly Genocide, where Ayoob Kara, Israel’s Communication Minister under Netanyahu, stated: “It is important to say that the government of Israel and everyone in the opposition likes Azerbaijan, wants to cooperate with Azerbaijan and cares about the future of Azerbaijan. It is legitimate to support Azerbaijan because they support us. I have visited Azerbaijan many times and they have visited us here. More and more, the relationship becomes strong. We advise them and they advise us, like I hope will be in all the states in Europe.”

“I visited Karabakh after the withdrawal of Armenia,” he noted. “The government advised me in different things. We have to do everything to make peace in this area between all the nations there. This is our position here. When I visited last time in Baku, I realized that we must bring them into the Abraham Accords agreement. Azerbaijanis are Muslim. Azerbaijan is like all of the areas we do economic peace in. Azerbaijan does benefit with this process. We will not stop with four states, but will expand to other states.”

According to Kara, “No one is against the Shia. The only issue we have is the regime in Iran, which is fundamentalist and extremist. People are afraid to talk about that, but the problem in the Middle East is surrounding the Iranian regime. We have to find a solution for that. But, we got no problem with Shias. The cooperation between Azerbaijan and Israel gives a benefit to everyone who wants to do the same style of peace.”

“I think that that one day, all of the areas that value life will be close to us,” Kara noted. “Not only Azerbaijan but all the area. War is difficult. No one needs it. No one wants it. Azerbaijan having peace with Israel gives a benefit to all the area. I am going to do everything as a former minister to support Azerbaijan as a state. I sent some friend of us to help and advise them on different things related to Karabakh. We can find a solution for anything that they need. Azerbaijan is a friend of Israel and Israel is a friend of Azerbaijan.”

In the same conference, prominent Middle East scholar Dr. Mordechai Kedar concurred that Iran is a common problem for both countries: “Azerbaijan is close to Iran and that causes atrocities like in Khojaly. The fact is that populations are forced to live together in entities that fail to maintain law and order. We saw the same thing in Yugoslavia. We see the same thing between Russia and Ukraine. To establish a state means to divide groups so that every group takes care of itself, without messing with the others. Borders were drawn regardless of what is happening on the ground. This is the source of all of the evil in this area for the last century.”

According to him, “Something really bad happened to the Azerbaijani people, regardless of what happened with the Armenians. The Azerbaijanis do not only live in Azerbaijan but extend down south to South Azerbaijan, which today is part of Iran. The Azerbaijani nation was divided between the Soviet Union and Iran, just like the Turkmen were also part of the Soviet Union and Iran because northern Iran is populated by Turkmen. We also know about the Kurdish tragedy. The Kurdish people are the biggest ethnic group in the world without a state. They are over 20 million people and they don’t have a state. They were divided by the British and Russians after the First World War. Nobody counted them or saw them. The same thing happened to the Azerbaijanis.”

“The ancient capital city of the Azerbaijanis is not Baku,” he noted. “It is Tabriz, which is occupied by Iran. This means that the majority of the Azerbaijani people till today are subjected to the Iranian state. The good thing for them is that their brethren in the Soviet Union are now free people for thirty years. They can run their own state and enjoy their own dignity and freedom, while their brethren in Iran are still subjected. They are not the only ones. Aside from the Turkmen, Azerbaijanis and Kurds, there are also the Ahwaz and Baloch. The Persians are the minority in Iran. They are only 35-40% of the population. The rest of the population are non-Persian nations living under the Persian yoke.”

Dr. Kedar claims that Iran is very fragile, which is why they want nukes: “That way, no one will mess with their domestic issues. This is the biggest threat to them, not Israel and America. In recent years, the Ahwazis started to rebel. The Azerbaijanis are the most pampered as they are the biggest minority after the Persians. But, many of the Azerbaijanis don’t buy this. They want to be independent and want to join their brethren in Northern Azerbaijan, just like the Germans of East Germany joined West Germany after they were liberated from the Soviet yoke.”

Dr. Kedar noted that last summer there were riots in Ahwaz and that many Azerbaijanis demonstrated in solidarity with the Ahwazi protesters: “They also suffered under the occupation. They call themselves the occupied territories. The minorities could dismantle the country if they burst into the streets at the same time. On the 16th of March, it will be a Zoroastrian festival, the Wednesday of the Fire. This time, they plan to burn institutions, army bases and police states to divide Iran into ethnic states, just like Czechoslovakia. They rely upon Azerbaijan to support them.”

According to him, “The regime in Iran knows about this plan. Apparently, they will prepare for this. Yet, the question is, what will the world say that only sanctions Russia, which did not say anything about Khojaly and said nothing about Srebrenica, and a world that does nothing as atrocities happen in Iran? This is the problem of the world. They ignore massacres like Khojaly. What will they do when the minorities of Iran burst into the street? Let us hope that the world will learn from what happened at Khojaly and what happens in the Ukraine and do more than impose economic sanctions. Bloodshed has occurred in too many places.”

The audience reacted well to the conference. Tamir, an Israeli resident of Netanya, claimed: “The evening was very interesting. I enjoyed the lectures there, especially the speeches by Dr. Mordechai Kedar. I was really amazed. I really enjoyed them.” Sivan, an Israeli from Bat Yam, added: “I loved all the speeches and the entire evening. Everything was very interesting. I very much loved the pictures that were displayed there, which showed Mr. Kara’s visit to the area. To see the pictures and to physically see what happened in Karabakh that showed that everything got destroyed and how this issue is so important was great.”