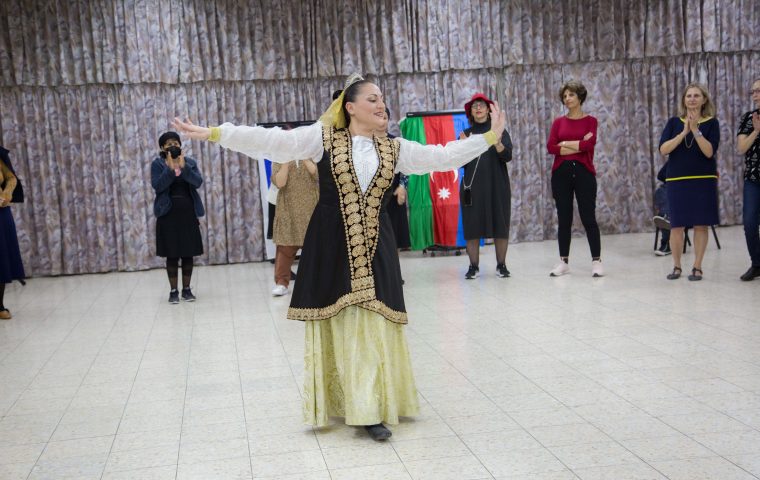 This week, the Economic Peace Center together with Aziz, an Azerbaijani cultural center, the Women’s Only Israeli Dance Group of Rali Abman, and the Caucuses Dance Group of Ziva Amarov held a women’s only Novruz celebration at Beth Israel Congregation, a conservative shul in Netanya, Israel. At the celebration, both the Azerbaijani and Israeli flags were proudly displayed, as was a traditional Novruz table, complete with semini and Azerbaijani pastries.

At the event, I gave a talk, where I explained what is Novruz to the Israeli audience: “Novruz is the Azerbaijani New Years. Novruz is celebrated at the end of the winter and the beginning of spring. The holiday originated in Urmiya in Iranian Azerbaijan and dates back to 505 BCE. Residents of Azerbaijan prepare for Novruz a month before the holiday. They plant trees, clean their homes, paint eggs and prepare special clothes. Every Tuesday before Novruz they celebrate a different element: water, fire, earth and wind.”

“On the day of Novruz, people visit their families, give gifts to children, children play with painted eggs and there are also many performances, singing and dancing,” I said in the talk. “On the Novruz table, there is a plate with seven types of food that begin with the letter S. There are also painted eggs and candles. There is also much about Novruz in the literature. The translation of Novruz is New Day. In the ancient Zoroastrian legends, the holiday symbolizes the victory of light and truth over the forces of evil.”

I stressed: “There are many similarities between Novruz and Jewish tradition. I don’t know if you know this but Passover is the Second New Years in Judaism. In the ancient world, New Year’s was in the spring, not in December like it is now. Novruz was also celebrated in the ancient civilizations of Iraq. As Jews, we took some of the traditions from them. On Tu B’shvat, we plant trees and start cleaning the home for Passover. In Purim, we celebrate the same theme of the forces of good led by Esther and Mordechai defeating the forces of evil, led by Haman. We also sing, dance and have performances, exactly like on Novruz.”

In conclusion, I stated: “At the Passover Seder, there is also eggs, exactly like on Novruz. In fact, the Jews of Greece even paint the eggs yellow. We also light candles and wash our hands during the Passover Seder like in Novruz. We also have the Seder Plate, which is like the Novruz Plate. Furthermore, I don’t know how many Moroccans are here, but my husband is Moroccan and his grandmother in Morocco did a table for Mimouna that was very similar to Novruz, with a plant, painted eggs, etc. Today, they don’t do this, but in the roots, it existed. They did this because Mimouna celebrates the end of Passover, the New Year in the Ancient World. And this is why in Azerbaijan they celebrate Novruz.”

After I finished, Ziva Amorov introduced herself and stated: “Hello ladies, I am very happy to be here. I came here to celebrate Novruz, the Azerbaijani holiday. I am not Azerbaijani. I come from another area of the Caucasus. I am from Northern Caucasus. I made Aliyah to Israel when I was three-years-old. But the traditions we kept alive at home, with the music and the dancing. The culture will always be with us. To my sorrow, the language is not. We always speak Russian or Hebrew at home. But whenever we can, we keep the culture and the traditions. I think that it is very important.”

Amarov noted, “Every Tuesday here, I teach Caucuses dancing. I teach women, men and also children. Today, I will do a show and then teach you two Azerbaijani dances, and you will dance with me.” Later on, Yana Salman, the head of Aziz, wished everyone a happy holiday and said: “May we always meet only at good times. I wish you peace, happiness and much greatness. Thank you very much.”

After the event, Salman stated in an exclusive interview: “My organization Aziz includes members of the Azerbaijani Diaspora in Israel that works to promote Azerbaijani-Israeli relations. The word Aziz has a meaning in Azeri and it means dear. Our organization was founded in 2007. This means in April, we will have our 15th anniversary. All of these years, we have done publications on Azerbaijan in Israel because in truth in Israel, they don’t know much about Azerbaijan. Azerbaijan wasn’t an independent country till 1991. Because of that, Israelis don’t know much about Azerbaijan.”

In the beginning of the event, many of the ladies from the Israeli dance group walked up to me and asked what is Novruz and all of this going on, and what was my connection to Azerbaijan. They appeared confused and lost. But by the end of the Novruz Party, they all loved Novruz and Azerbaijan. Almost all of the Azerbaijani food and wine was eaten up, and most of the magazines on Azerbaijan in Hebrew were taken. Some of the ladies walked up to me afterwards, stressing that they did not know that many Novruz traditions were similar to Jewish traditions. This represents the typical Israeli reaction to anything connected to Azerbaijan. They are not hostile, but many are clueless.

“We also show the beauty of Azerbaijan, so that people will want to travel there from Israel,” she added. “We also organize concerts. From here, we take artists to Azerbaijan. We brought many artists to Azerbaijan so that they can learn about Israeli culture. We also brought writers and brought many books to print that brought awareness the history of Azerbaijan. We did book launches for these books. We took Israeli authors to Azerbaijan as well. We also do Novruz celebrations like we did in Azerbaijan, with the semini, sweets and all of the dances of Azerbaijan. We do these Novruz celebrations across Israel. In Azerbaijan, we all celebrated Novruz, Easter and Passover together. We all celebrated together without differentiating anyone and that is what we do here also. Additionally, every week we do a cultural evening, so that people can know about the Jews of Azerbaijan and Azerbaijan more generally. There is much to say about the positive relations of Azerbaijan to Jews. The Jews were treated well. Every week, I do something on this well.” In conclusion, she said that the event was a major success and she thanked me for my love of Azerbaijan. Rali Abman, the Israeli dance teacher, also said that “it was a wonderful evening and very successful.”