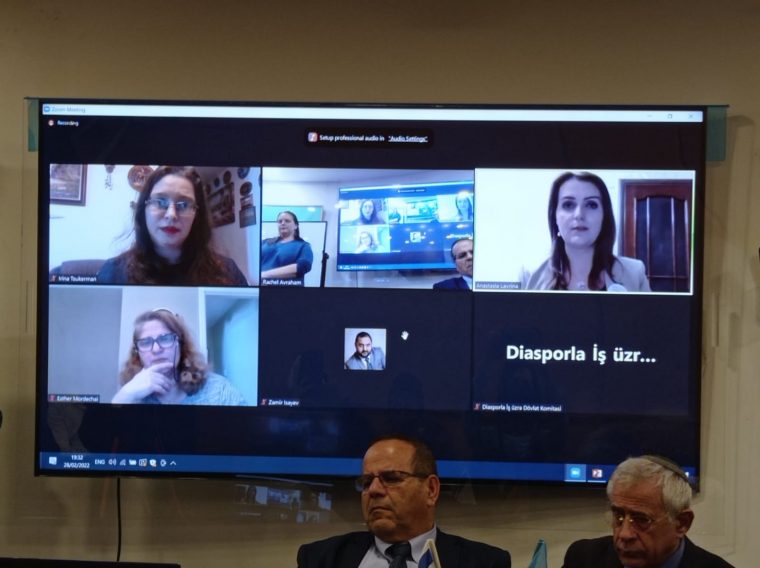 In her talk, prominent Christian Azerbaijani journalist Anastasia Lavrina stated: “Khojaly is just one out of many other genocides committed against the Azerbaijani people by Armenia. Before and after Khojaly, Armenia committed massacres against Azerbaijanis in places such as Agdaban, Bashlibel, Garadagli and others.”

She stressed, “Armenian aggression and the occupation of 20% of Azerbaijani lands for almost 30 years affected Azerbaijani people and all ethnic groups. In the end of the 80s, Armenia started its ethnic cleansing policy. More than 200,000 Azerbaijanis were forcibly deported from Armenia. Today, Armenia is a mono-ethnic society.”

According to Lavrina, “On February 26, 1992, Khojaly city was razed to the ground overnight. 613 innocent people, including women, children and the elderly, were killed for the sole reason that they were Azerbaijanis. Among the victims there were couples from interracial marriages.”

“After the capture of Khojaly, with the use of bulldozers and other equipment, all cultural monuments were completely destroyed including the Khojaly cemetery, which is considered one of the most ancient burial places,” Lavrina noted. “In that cemetery, there were not only the graves of Azerbaijanis but also of other peoples, with different ethnicities who used to live there before.”

Lavrina stressed, “In the beginning of the 90s, very little attention was paid by the international community to the Caucasus, which made it possible to carry out ethnic cleansing. The Armenian political and military leadership felt they had impunity. They were openly speaking about their crime. No one reacted. Children continued to be killed during the ceasefire. The shelling of Ganja, Barda and Tartar during the 44-day war, as well as the mass graves found in Karabakh after the war, testify to this.”

“The Armenian invaders destroyed not only the historical and cultural heritage, but also many religious sites of both Muslims and Orthodox Christians,” she added. “Positioning themselves as the defenders of the entire Christian world in the South Caucasus, the Armenian occupants committed a real act of vandalism against the Russian Orthodox Church, founded in 1894 and located 13 km from the center of the Khojavend region of Azerbaijan. Armenian forces built a military training ground very close to this place. The church served as a target, as evidenced by numerous traces on the facade of the building, from large-caliber shells. During the years of occupation, another Orthodox church built in 1847 in the city of Shusha was subjected to an act of vandalism. After the occupation of the city of Shusha by the Armenian armed forces in 1992, the church was illegally rebuilt into an Armenian church.”

According to her, “Some countries may think that 613 people killed in Khojaly looks like too small a figure against the background of other ethnic conflicts that were taking place at that time. But since this crime was planned in advance, it falls under the category of genocide and there should be no statute of limitations for those who carried out the massacre, just as there is no statute of limitations for Nazi war criminals.”

“For those responsible for the Holocaust and ethnic cleansing in Yugoslavia, the international community has established tribunals, respectively, in Nuremberg and The Hague,” Lavrina stressed.

“Within the framework of the international campaign “Justice for Khojaly”, organized on the initiative of the Heydar Aliyev Foundation, serious steps are being taken to inform the world about the Khojaly genocide,” she emphasized. “This campaign is also a call to ensure that such tragedies never happen again in the world.”

In conclusion, Lavrina noted, “Today, Azerbaijan is getting ready for a big return to Karabakh. We are the winners. We liberated our land from the Armenian occupation. Despite that, we will never forget the pain our people live with. We remember our history but we do not demand revenge. We demand justice – Justice for Khojaly. The Armenian leadership must recognize the guilt of their country and punish those responsible to the fullest extent of international law. This would be a step towards peace!”